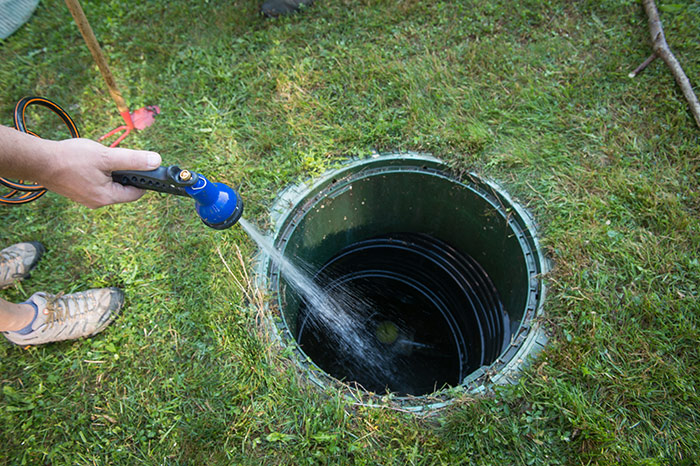 Many times folks believe they can simply restart a septic system by flooding it with a high dosage of pre-treated bacteria to eat up the sludge that might be overloading a conventional tank and causing a blockage. While these treatments do have some effect, they are not a system replacement per se.

The fact is, there is already plenty of bacteria working a hardy job in most septic tanks breaking down solids. Unfortunately, it still ends up creating sediment that displaces water and ultimately becomes a silty sludge that can block water flow and limit its eventual drainage out to the leech field or drain field. At that point, it doesn’t matter how much bacteria is present, the tank needs to be physically cleared usually through a professionally-equipped pumping.

How to Maintain Any Septic System Once You Choose One

A worker emptying the underground septic tank with a thick suction hose.

A key step any property owner should be taking is to first make it a regular habit to inspect the current system on a regular basis and have it serviced/pumped consistently as well. At the latest, any septic system with a holding should be pumped and cleaned every three years and not later. This figure might actually shorten and become more frequent if the household size is large and the system is used for more than average home or building.

Second, it might seem counterintuitive but the less water going down the drain, the better. Efficient toilets and faucets can go a long way in limiting the amount of wastewater produced, letting bacteria do its job better in the tank, and reducing the demand on the system to drain and dissipate faster.

Finally, drains should be kept free of non-biological material. Trash waste and processed products should never be sent down the drain and should instead be disposed of in garbage cans instead. These kinds of materials don’t break down quickly and will contribute to the system build-up.

Don’t forget, maintenance of your system also includes keeping up the condition of the drain field as well. No one should ever be allowed to park a car or place anything heavy on the field location itself. Trees, bushes, and thick-root plants should not be allowed to grow anywhere near a drain-field ever.

The roots can be pervasive and extremely destructive to pipes and the tank itself. And another drainage from the house or building should be diverted to a different location versus the drain field. This will avoid excess saturation of the soil with too much water, especially during the rainy season.

For information or to make an appointment, contact Morse Engineering and Construction.