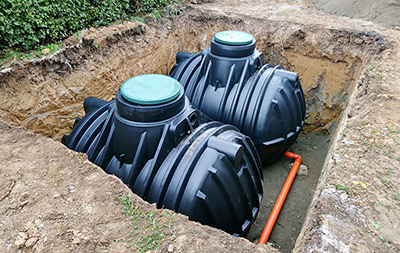 To compensate for a poor layer of soil, sand is used instead. Sand is extremely permeable for water, which flows through it extremely fast. Sand also collectively has a high density which blocks solid matter from moving forward. With this approach, a sand drain field is essentially created producing the desired drainage effect not otherwise possible.

For areas where there might be a high sensitivity to a drain field and need to ensure the water existing is completely clear of matter a looped system provides a double sand filter effect. Water moves through a sand block twice before it finally drains and evaporates out. Whatever the first sand filter did not stop, usually in very small particulate matter, the second layer does block.

Using gravity as an enhancing power, this approach keeps the water line and the tank above the ground level, forcing the wastewater to move into a drain field situation that pulls water downward. The gravity effect forces water through a sand layer that filters it so what finally exits is completely clear liquid into the surrounding soil area.

Designed for very dry and arid locations, this system uses an evapotranspiration approach to draw water into moisture deficit areas of dry soil, grass, and plants. All three create a suction effect of moisture pulling it through the system. This approach, however, should never be used in areas where there is more than two feet of rainfall annually.

Oxygen is a major destroyer of anything organic. This is a well-known biological fact, especially with rotting material. The Aerobic Septic system literally and proactively exposes wastewater to oxygen which speeds up the breakdown process as well as the evaporation later on. Once the water moves through the system it tends to be cleaner and dissipates far faster than other systems.

This approach is ideal for homes where the existing landscape needs to be used and it might not be possible to install the septic system in a nice open field. With the drip irrigation design and the wastewater is pumped out into a network of pipes and channels buried under the ground to the level of 8 inches depth.

However, because this system is quite complex in terms of connections, it’s critical that both the pump out block, as well as the channels, are kept clear through filtering as well as regular maintenance. Otherwise, the channels will likely block up and fail pretty quick.

It’s not a true alternative septic system per se, but the low-pressure approach does work better in soil areas where the ground doesn’t want to be very cooperative. This system utilizes a low-pressure pumping effect to push water into the tank and out to the soil, forcing it to drain instead of waiting for gravity to do all the work. As the water moves and spreads, it drains out and dissipates into the surrounding soil faster.

For information or to make an appointment, contact Morse Engineering and Construction.