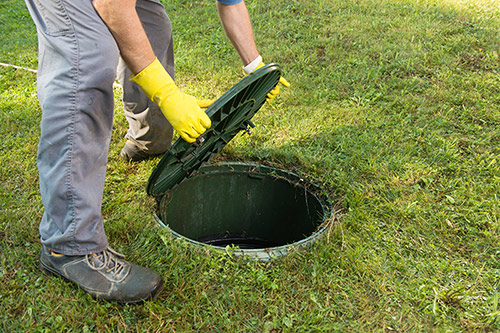 Most prospective home buyers want to know as much as possible about the condition of the house they are buying. Few would be willing to buy a house with a leaking roof or a heating system that could fail at any time without at least getting an adjustment in the sale price to compensate for the problem.

But even careful buyers often overlook a critical system in the house that could cost tens of thousands of dollars to replace: the septic system.

A lot of people don't realize that a good part of the value of a house may be buried outside in the yard. In most cases, since a septic system is out of sight, it's out of mind, too.

Many buyers pay too little attention and ask too few questions about the condition of the septic system when they are buying a house.

To make an informed decision about a house with a septic system, prospective homeowners first need to understand how such a system works.

In most cases, the system consists of three basic parts: the septic tank into which waste from the house is deposited; a distribution box on the outlet side of the septic tank; and a drainage field.

The septic tank will be built out of either concrete, steel or fiberglass and is generally a rectangular box that can hold 1,000 to 1,500 gallons of waste. The tank is usually buried a few feet below the surface and has a covered opening through which it can be cleaned. One end of the tank is connected to the main sewage line coming out of the house and the other end is connected to the distribution box.

In a properly operating system waste water from the house flows into the tank through the sewage line. Once there, the solids fall to the bottom of the tank as the level of liquid in the tank rises. When the liquid rises to the outlet port -- which is always lower than the inlet port -- it then flows out of the tank and into the distribution box. From the distribution box the effluent is then evenly distributed into the drain field through perforated plastic pipes buried underground.

Though such a system may seem foolproof, several things can go wrong. For example, if the solids in the septic tank are allowed to rise to the level of the outlet port, they can clog the distribution box, the perforated drainage pipes and the drain field itself.

Too much use can overtax a properly functioning system. If too much waste water drains into the system too quickly, for example, the drainage field may be unable to accommodate the volume. In fact, adding too much water to a system too quickly can stir up solids in the tank and allow them to migrate into the distribution box and the drainage pipes, thereby exacerbating the problem.

Remember the saying: "The grass is always greener over the septic tank?" Well, if the grass is greener over your septic field, that probably means that there is water pooling underneath. And if that water breaks the surface, the local health inspector can shut you down immediately.

Those buying a property with a septic system should do two things: get as much information as possible about the maintenance of the system from the current owner and then hire an expert to inspect the system.

If you're going to move into a house with a septic system, you want to make sure that the system can handle what you need it to handle. While a particular system might function correctly when handling 400 gallons a day, that same system could be seriously overtaxed if subjected to twice that amount.

And that could easily happen if a large family takes up permanent residence in a house that was originally intended for only seasonal use -- something that happens frequently in resort areas.

You would also want to know how well the system was maintained. Under normal circumstances a septic tank should be pumped clean every two years or so.

Very few people maintain their tanks the way they should. And even if you find a house that has a tank that was cleaned regularly, you should still have the system inspected by an expert.

Just hiring a home inspection service to inspect a house will not necessarily produce an adequate inspection of the septic system.

Most home inspection companies are not going to do a really thorough inspection of the septic system. The most commonly used test -- in which a fluorescent dye is introduced into the system to determine whether any effluent is surfacing in the drainage field -- will only show problems with systems that already have fairly serious problems.

The best test is what is known as an open pit test. And that can cost as much as $600.

With an open pit test, the home inspection company calls in a septic system cleaning company to pump out the tank so that it can be inspected. Doing so, he said, will generally require removing the dirt from on top of the tank and the distribution box so that the covers can be removed and the inside of the tanks inspected.

Some companies will use mirrors to inspect the inside of the tank and some will use video cameras and fiber optics to inspect the system. Metal septic tanks are especially prone to rust damage.

Metal tanks are generally only going to last about 25 years. If you have to replace a septic system, you could easily be looking at a cost of anywhere from $5,000 to $15,000, depending on whether or not the drainage field has to be replaced at the same time.

Accordingly, it is critical, at the very least, to have a home inspection or septic system expert determine, as accurately as possible, the area used as the drainage field and to inspect that area for signs of a problem.

This is one of those tests where no news is good news. There should be nothing about the surface above the drain field that would indicate there is a drain field beneath.

If you use a dye test, you want to walk the surface of the field to see if any of the dye has surfaced. And you don't want to smell anything that you shouldn't be smelling.